Two Nigerian Christians in Libya have converted to Islam.

Reports have it that the conversion took place on Saturday, April 7 in Kilka town, about 150 kilometres south-west of the country’s capital, Tripoli.

It would be recalled that two Nigerian women working as housemaids also converted to Islam last Wednesday, April 14.

Nigerians on social media have since been reacting to the news as many people gave their diverse opinions on the decisions of the men to change their religion to Islam. 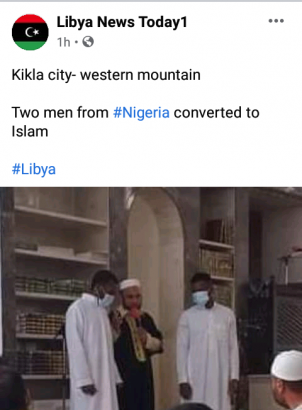 According to some commentators, the men are welcome to Islam, which they referred to as the religion of light.

“These men Have made a good decision and I think they should be respected for taking thier own decision as they are adult enough to know what is good for them” one Femi Adesanya wrote on Twiter.