Veteran Nigerian actress, Patience Ozokwo has taken to social media to tender an apology to her fans for acting wicked roles in many movies.

Ozokwo was known for playing the roles of a wicked mother-in-law or stepmother in movies and ruining the life of people in her nuclear or extended family through spiritual means.

The roles she held in these movies have made many viewers of Nigerian movies rate her as an evil person and she is often tagged in conversations that have to do with wicked people.

The actress however recently took to her Instagram page and shared a post asking fans which movie traumatized them as a child growing. 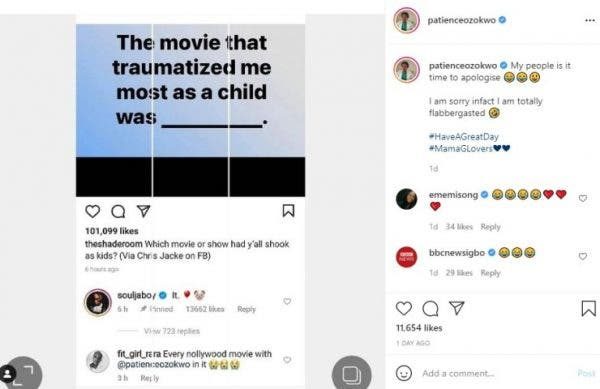 Responding to the feedback, Patience Ozokwo, offered an apology to all who have been affected in one way or another.

âMy people is it time to apologize 😂😂😃. I am sorry in fact I am totally flabbergasted 🤣 HaveAGreatDay #MamaGLovers❤â

Many told her that they found her Nollywood character(s) really disturbing when they were children.

âI really hated you a lot when I was young because of the way you were acting, and I didnât know that you were just acting. I thought that it was real, that it is the way you treat people. But the endings were so good for you because they ended when you got mad or have accidents.

âBut mama, that was then. Now, I am a big girl and I know what you were trying to teach us that whatever you sow, you will reap, and I love you so much and wish to meet you one day.â