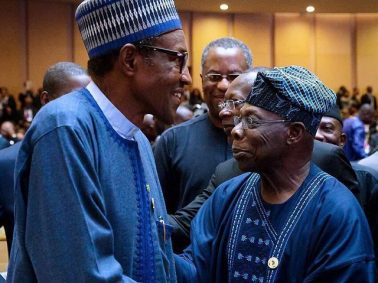 An erstwhile President of Nigeria, Chief Olusegun Obasanjo, has broken the silence on his recent open letter to President Muhammadu Buhari, saying that his statement was not borne out of malice or ‘bad belle’ but out of his deep concern for the situation in the country.

The ex-president said this on Thursday at the secretariat of the Nigeria Union of Journalists, Oke Ilewo area of Abeokuta, shortly after the Coalition for Nigeria Movement was inaugurated in Ogun State, and he was registered as a member of the movement, after formally filling the registration form.

His statement is coming on the back of the reactions and backlashes that greeted his meeting with President Muhammadu Buhari during the African Union (AU) summit in Addis Ababa, Ethiopia, where he also took group photograph with him.

The former president while addressing scores of potential members who had gathered at the venue, said he was surprised that many Nigerians were worried that he had exchange pleasantries with President Buhari at the African Unity summit at Addis Ababa, capital of Ethiopia, few days after he wrote the open letter to him (Buhari).

He said, “Last week, I issued a statement which I did not do lightly or frivolously but out of deep concern for the situation of our country.
“I wonder why some Nigerians were worried why I had to pay respect to the Nigerian President at Addis Ababa. That’s my own upbringing as a well-born and bred Yoruba boy.
“That doesn’t mean that what I have said about the President, which I did not say out of bitterness and hatred. It is evidence that the President has performed, in some areas, good enough.
“In other areas not good and a proper advice which he may take and he may not take.
“I didn’t do that out of malice or out of ‘bad belle’; I did it out of my respect for that office and my interest and I hope in your interest and the interest of Buhari in Nigeria.”

He, however, assured that the CNM is not like every other movement in town, saying the one being championed today (Thursday) is a big masquerade and urged Nigerians to join.

He added: “There are other movements but we, as far as I know, have no direct or indirect relationship with any other movements. We do not.
“But as I said, if there are people of like minds, people who shared the view and the aims and objectives of Coalition for Nigeria Movement who want their members to join this movement, we will not object. We will welcome them.
“But to the best of my knowledge, this is a movement that has no relationship with any other movement that I know of.
“This is the new message in town, the new dance in town, the ceremony in town and I will appeal to you to join this ceremony and dance in town because there may be many masquerades.
“And those of you who had my own type of background, when we were growing up, we were playing masquerades too. But those were small masquerades, but when big masquerades come out, the small masquerade must come out. I appeal to you to join the ceremony, the dance and the message.”