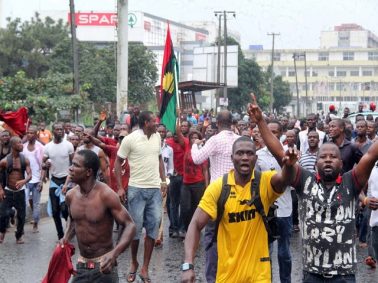 Nigerian Unity, IPOB And The Use Of Military Force, By Inibehe Effiong

There is an ongoing judicial process against the self-acclaimed leader of the Indigenous People of Biafra (IPOB), Nnamdi Kanu. Once a dispute has been submitted to a court of competent jurisdiction for determination, parties cannot go behind the court to settle the dispute, save for an out of court settlement between the disputing parties.

This piece was written by Inibehe Effiong. The views and opinions expressed here are those of the author and do not necessarily reflect the official policy or position of 360Nobs.com.

The federal government has the right to seek the revocation of the bail of Nnamdi Kanu, as it has done. The trial Court is empowered by Sections 169 and 184 of the Administration of Criminal Justice Act, 2015 to reconsider and revoke his bail, and issue a bench warrant for his arrest, if it is shown that he has breached the terms of his bail.

If Nnamdi Kanu has committed further offences during the pendency of the subsisting criminal charges against him at the Federal High Court in Abuja, the federal government as the prosecution is at liberty to either amend the existing information (charge) to incorporate the new offences by increasing the counts or to file a fresh charge against Kanu.

We should not foreclose dialogue as a panacea to resolving the Biafran agitation. This agitation is symptomatic of fundamental defects in the Nigerian state. We cannot solve our structural and existential problems by denying their existence.

Before you castigate and or deride me for advocating for dialogue as a panacea to resolving the Biafran agitation, keep sentiments first and reason objectively. Some of us cannot be bullied.

People have said that Nnamdi Kanu is not above the law. That is correct. Nobody is or should be above the law. However, I am appalled by our selective insistence on the application of the Rule of Law.

President Buhari has consistently disobeyed valid and subsisting court orders. You cannot use lawlessness and impunity as weapons for fighting criminal activities and insurrection.

Where is the Rule of Law in the case of the suspended secretary to the government of the federation and the director general of the National Intelligence Agency (NIA)? Why has the government refused to arrest and prosecute the Northern youth who issued quit notice to Igbos to leave the North?

The right to self-determination is recognised under the United Nations Charter and by the international community. Let’s stop deluding ourselves about an elusive unity of the Nigerian republic which only exists on paper.

It is primitive arrogance for any enlightened person to assert that the “unity” of Nigeria is non-negotiable. Which unity are we talking about? Is it the unity between the Northerners and the Southerners or between Christians and Muslims?

How many of the apostles of unity, including President Buhari, have by their actions and words, demonstrated love for Nigeria as one nation and their fellow citizens without bias and prejudice? Are we no longer loyal to our different ethnic, tribal and religious groups?

Hypocrisy is a serious problem in Nigeria.

Nigeria was created by the colonial masters for their self-fish economic interests. We need to sit down and discuss the best ways to live in peace and harmony with one another based on mutual respect, justice and equity.

I will never support the break-up of Nigeria. I see our diversity as our strength. Those who have followed my commentaries on social media closely will attest to the fact that I do not have any modicum of sympathy for Nnamdi Kanu and IPOB.

However, we cannot pretend that Nigeria as at today is united.

The United Kingdom that founded Nigeria recently held a referendum for the Scottish people of that country to determine whether they wished to remain in the union. In that same country, citizens recently voted in a referendum to quit the European Union (EU).

That is the country that gave birth to Nigeria. Yet, we are here attacking and insulting those who call for negotiation of the terms of our togetherness.

The Constitution is a document which can always be altered to reflect the needs of the people.

Before you advocate for the use of military force in the resolution of the Biafran agitation, remember Zaki Ibiam and Odi. Force never quelled the Niger Delta agitation. Our military have not been impressive in abiding by the rules of engagement.

If Kanu or any IPOB member is caught using firearms to fight for a Biafran nation, let the law take its course. But do not deploy armoured tanks and soldiers to fight and kill peaceful protesters whose views we do not have to agree with.

Inibehe Effiong, a legal practitioner and the convener of the Akwa Ibom Conscience, can be reached via: [email protected]

This piece was written by Inibehe Effiong. The views and opinions expressed here are those of the author and do not necessarily reflect the official policy or position of 360Nobs.com.