Prince addressed what possibly transpired between them during a question and answer session on his Insta-stories when a follower asked why Chioma blocked him.

In response, Davidoâs lawyer stated that although he has a brother/sister relationship with Chioma, they disagree on many things.

He admitted that Chioma has repeatedly blocked him on Instagram. According to him, he doesnât know why she recently blocked him again but hope to find out soon.

Sheâs blocked me before like 2 to 3 times. We argue a lot but I come with a brother/sister relationship. Sheâs legit like a sister to me (when we are not fighting). This particular one, Iâm not sure. Letâs hope I find out soon.

âThe funny thing is whenever we fight and I report to David, heâs like âI beg you people shouldnât involve me in your wahala. Sha finds way settle am, sheâs your younger sister.â 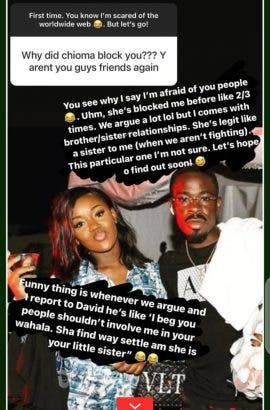