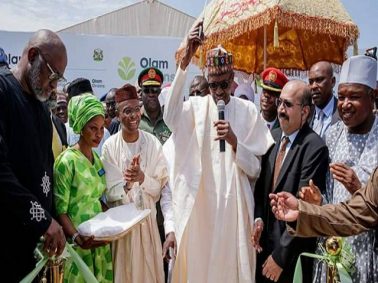 The multi-billion naira Olam poultry farm located at Chikpiri Gabas village, Gwagwada, in Kaduna State, is said to be one of the largest hatchery and poultry feeds mills in Africa.

President Buhari, who had once said that his administration would not rest until every Nigerian has access to affordable food, added that investment such as the Olam farm and mill would spur the country’s economic growth.

He said: “It is our belief that agriculture offers the most viable and all-encompassing option in an attempt to diversify our national economy and it is in this direction that we must first be able to feed ourselves from what we grow and grow what we eat before we can comfortably turn our attention to many of the key problems of our daily lives. The commissioning of this massive facility today is a living testimony to our claim that serious and lasting growth is taking place in our economy and that growth can only last if it begins at the grass roots.
“About six months ago, we announced that we are in a recession, we announced the recession ourselves and when the National Bureau of Statistics (NBS) presented the true picture of the state of affairs, we accepted the reality and confronted it head on with courage and a few months down the road, the NBS told the cherry news that we are getting out of the heat of recession.”
”We are happy to note and we believe that majority of Nigerians are happy that we are getting out of the most disturbing scenario of our economy,” Buhari said, adding that his government was slowly reducing rural urban drift and the country was beginning to witness reverse migration from the cities to the villages.
“Another achievement of our agricultural agenda is the crowding in of the private sector. Today we are in Kaduna, six weeks ago we were in Kebbi state. About four months ago we were in Kano and in the next few weeks we shall be in another state commissioning projects similar to this.”

Middle East Olam International Business Head, Mr. Vinod Kumar Mishra, had earlier said that when inaugurated, the multi-million dollar investment would utilise around 180,000 tonnes of corn and 75,000 tonnes of soya beans for its feed production.

Mishra said the company had the capacity to produce 360,000 tonnes of animal feeds every year.

He said the company would also produce 1.6 million day-old-chick every week.

Governor Nasiru El-Rufai of Kaduna state had on April 10, 2016 laid the foundation of the project which is adjudged the biggest of its kind in Sub-Sahara Africa.

Olam International is a leading agri-business operating across the value chain in 70 countries is investing $150 million (approximately N30.0 billion) in the project.